WHY WE WROTE IT

Career aviation instructors Anthony Cirincione and Scott Felton reveal the tools and techniques world class instructors use to stand out as the best-of-the-best. For 39 years they've continued to develop their skills and ‘practice what they preach.’

With this guide, conveniently organized by the various settings in which we teach, you’ll be able to quickly refine your individual teaching style. For those instructing in the classroom, simulator, or aircraft, there are chapters specifically dedicated to each setting. 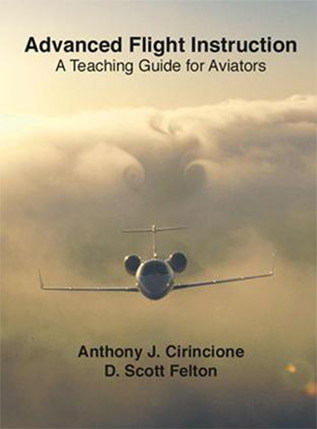 Anthony J. Cirincione . . . has over 39 years of aviation experience and holds the following ratings: ATP airplane and helicopter, Gold Seal CFI airplane, helicopter, gyrocopter, glider, weight shift control, & powered parachute, FE – Turbojet, and A&P with Inspection Authorization. He's typed in Cessna, Learjet, Dassault, and Boeing aircraft. He has a Master of Science in Aeronautical Science. He has taught A&P students for Embry-Riddle Aeronautical University, and Learjet 60 initial and recurrent classes for FlightSafety International. Prior to that, Anthony was a F-111 Instructor and Flight Examiner in the US Air Force, and an instructor at the USAF Fighter Weapons School flying the mighty F-4 Phantom. He has over 10,000 hours mostly in fighters and corporate aircraft. When not immersed in aviation, he enjoys fly-fishing, bow hunting, and four-wheelin’ his Jeep.

D. Scott Felton . . . led the US Air Force’s Follow-on Test and Evaluation of the F/A-22 fighter. He has Master of Education in Adult Education, and is a Graduate of the USAF Fighter Weapons School. Scott is a Flight Examiner in the US Air Force and an instructor in the F-15E Strike Eagle. He has published over 20 articles on flying and flight instruction and has designed over two dozen training programs for fighter aircraft. He has over 2500 hours in fighters and civil aircraft. When not immersed in aviation, Scott enjoys writing, fly-fishing, and other outdoor sports.